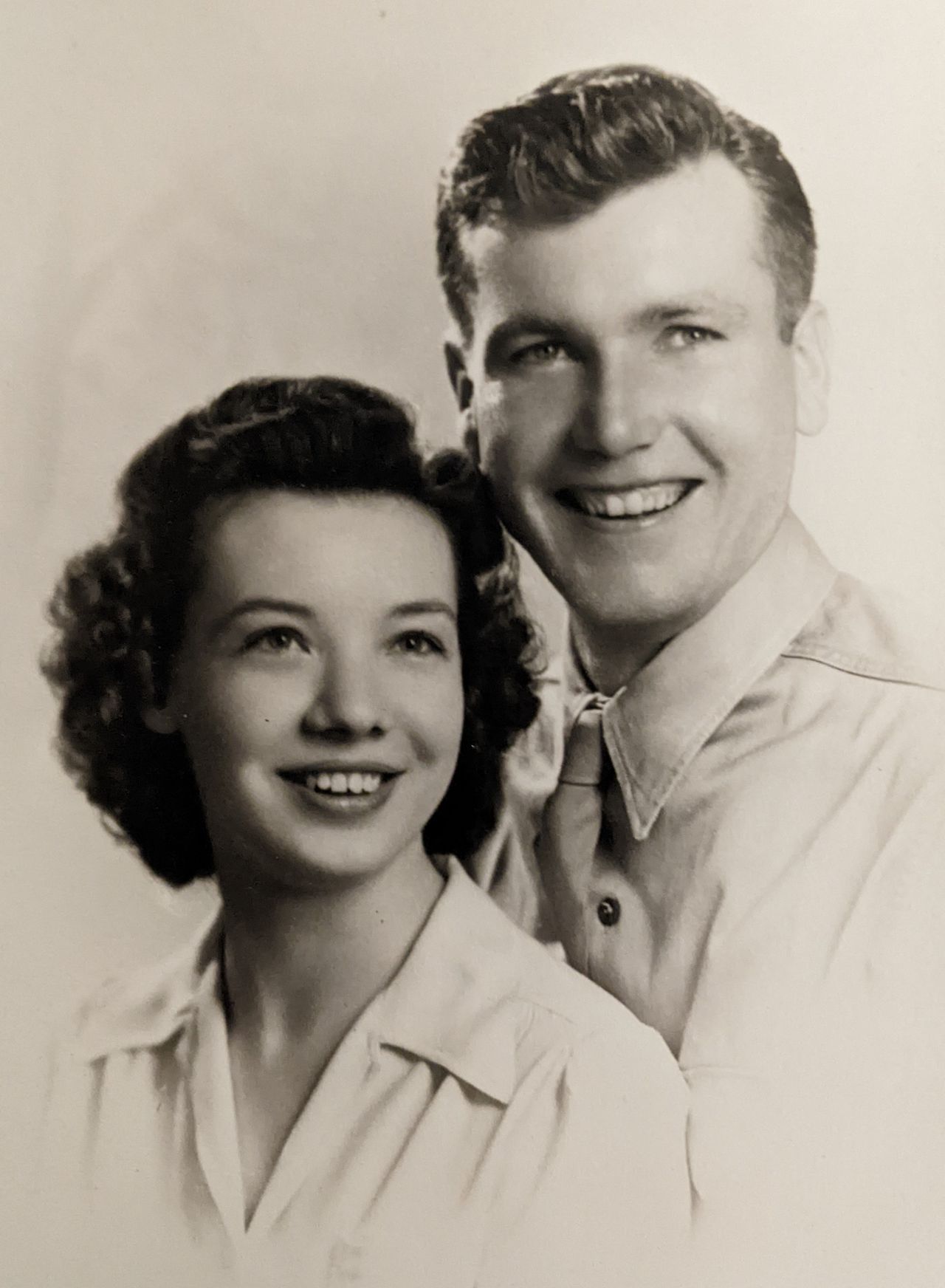 CLEVELAND, Ohio — It’s Father’s Day and I’m thinking of my dad, as honestly as my heart will allow.

Born the third of six in 1917, to a Czech immigrant father and first-generation Czech mum, his childhood ran concurrently with the First World War, the Crash of ‘29, and the dancing ‘30s. Childhood stories were few – perhaps, on purpose.

I begged for one story, repeatedly, about how he and his siblings went swimming at the forbidden quarry, where he dove in headfirst, promptly burying his head in the silt bottom. When he didn’t pop up, his brothers dove in and pulled him out by his legs. Imagining those wiggly legs made me laugh.

My mom and dad started dating near the start of WW2. America’s support of Europe made resources scarce. Upon one visit to see Mom, Dad greeted my maternal grandmother with a live chicken he “found” on his way over. Grandma asked no questions, and dinner was good.

About a year later, in November 1940, my dad’s mom died of a stroke at age 47. Whether in response to increasing war abroad or life’s fragility stateside, my parents married in a civil service two weeks after she was buried.

A quick honeymoon at Cook’s Forest was followed by a rented house and machinist jobs. It was the calm before the war. In July 1943, my dad was drafted into the Army. He spent 15 months near Salem, Oregon, training for combat and Mom — like many enlisted men’s wives — followed him. Days of leave were spent together, until the inevitable.

On December 1, 1944, Dad shipped out to France’s frontline, and Mom went home to Warren to live with her folks. I have boxes of correspondence that crisscrossed the Atlantic. Sometimes, Mom’s letters chased Dad from post to post, as troops moved along the edge of no-man’s-land. Dad’s replies mention bad food, buddies, trips into town, wanting cigarettes, and how he loved his wife and life back home.

Back home, newspapers published the names of wounded, killed, missing, or captured soldiers. My mom scanned it daily for “Robert Kouba,” until he showed up. He was wounded. After being patched up in a French hospital, he went back to the front.

When the missile sliced across his shoulder blade, it spread metal confetti across his back. I would count the dark crumbs beneath his skin around the two long scars, unaware shrapnel is painful and prompts memories of horrendous days.

Purple heart in hand, Dad came home in late January 1946, a 180-pound shadow, hanging on his six-foot frame. He met my sister, born while he was away. Theirs was a difficult relationship – perhaps a casualty of war.

Fast forward to the late 1950s, when Dad, then a carpenter for the City of Cleveland, was living his gentleman-farmer dream on 14 acres in Streetsboro. He and his craftsmen buddies finished building the house in ‘56 and by 1960, he had hay fields and fenced pastures, a swimming pond and huge garden, some chickens, a few beef cows and a horse.

In July of ‘61, Dad, now 44, had a newborn daughter — me. In the 15 years since the war, he had continued his family’s heritage of drinking too much, too often. He made up for all the SPAM and scarcity of cigarettes by eating his way to 300 pounds and developing a fondness for Newports.

His drinking led to several car accidents, the last in the center of our hometown. At three, I liked rubbing lotion on his stitches where the steering wheel had cut his belly, unaware of the humiliation the “town drunk” caused my brother during his high school years.

Mom drew the line and food became Dad’s drug of choice. He could eat a dozen donuts at one sitting. Buffet restaurants were his fave. It’s not that he didn’t care. He had tried to lose weight before I was born and again, when he entered a special Cleveland Clinic weight loss program when I was about five, and again – well, a full belly was a happy belly.

I remember Dad leaving for work at 5:30 a.m. for an 8 a.m. start after a 45-minute commute. Seems getting a sandwich at Slyman’s to eat later at lunch and a coffee to drink with the guys in the shop before they headed out to worksites was the only way he was willing to start his day. He had his priorities.

Dad was large in many ways. His laugh rang walls. His hunting and fishing tales raised brows. He had the uncanny ability to harvest the first pea pod every spring, rubbing the neighbors’ egos raw. He like being first. He liked being the center. He liked John Wayne, Hogan’s Heroes, Archie Bunker, and Frankie Yankovic. He liked lying down on the living room floor.

His countenance, an open barometer, blared angry silence and grinned pure happiness. His eyes flashed the rest. Family gatherings were favorite events. Profanity was everyday language where a good story incited “well, I’ll be damned” and a hammered thumb brought an “SOB.” For Dad, swear words made good adjectives, answers, and reactions. In my forties I followed suit and now every well-placed four-letter word makes me smile – and think of him.

Dad and I spent a lot of time together before my adolescence interfered. We’d walk the lane to the barn, my small hand able to grasp just two fingers on his big hand—a remembered image I hold dear. He paraded me courtside at my brother’s high school basketball games as I shook my curls, set by my mom or sister at his request. He perched me on tree branches and tractor fenders. He sang me songs that I, in turn, sang to my children (now to grandchildren!). He took me camping and fishing in Canada every summer for years. I was his golden child but didn’t know it. He was my favorite human. I hope he knew it.

My dad was generous to neighbors, friends, coworkers, and me. He gave me a minibike for my eleventh birthday and contact lenses (major investment) when I turned 14. He passed on the knack of breathing a tune while doing a task and taught me to measure twice, cut once. In 1980, he walked me down the aisle crying, overjoyed he had lived to see his little girl’s wedding. My first child was born 16 months later. Eight months after meeting my son, he died.

The memory of him holding my firstborn in his strong forearms on the kitchen table so they could talk face to face is so clear, I travel through time and witness the moment again. It’s been 40 years since I said goodbye. I still miss him so much it hurts. Happy Father’s Day, Dad. Love you.

Leslie Kouba, a lifetime resident of Northeast Ohio and mother of four completely grown humans, enjoys writing, laughing, and living in Cleveland with her wife, five cats, and a fat-tailed gecko named Zennis. You can reach her at [email protected].

Loopholes and Missing Data: The Gaps in the Gun Background Check System - The New York Times

How to care for your eyes – Daily Trust